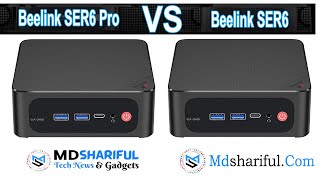 Beelink has introduced the Beelink SER6 Pro and SER6, a pair of mini-PCs working with AMD’s newest Zen 3+ APUs. Available from US$549 and US$649, respectively, the pair are already out there to pre-order; however won’t start transport till someday subsequent month. You can also like Beelink SER5 and SER5 Pro.

Beelink has launched the SER6 and SER6 Pro, a pair of mini-PCs that arrived just a few days after the corporate unveiled the SEi12 Pro and 6 weeks after previewing the GTR6.

Like the latter, the SER6 sequence is AMD Ryzen-based, though neither mannequin is as highly effective because of the Ryzen 9 6900HX-backed GTR6. Still, the SER6 and SER6 Pro depend on the Ryzen 6000H sequence, which has options for Zen 3+ CPU cores, RDNA 2-based iGPUs, and 45 W TDPs.

Specifically, the SER6 comes with the Ryzen 5 6600H, a 6-core half that clocks as much as 4.5 GHz and helps 12 threads because of Simultaneous Multithreading (SMT).

Also geared up with the Radeon 660M, the Ryzen 5 6600H ought to fall between the efficiency of the Ryzen 5 5600H and Intel Core i5-12600H whereas, delivering higher GPU capabilities than each processor.